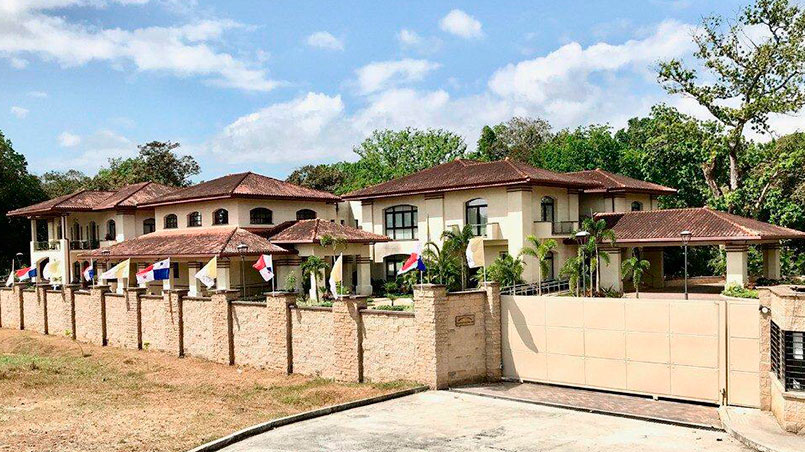 Posted at 12:37h in News by Marketing

THE NEW HEADQUARTERS OF THE APOSTOLIC NUNCIATURE OF THE VATICAN IN PANAMA, A MONUMENTAL WORK AT THE INTERNATIONAL LEVEL, EXECUTED BY ANTONIO AFONSO GROUP.

Pope Francis has been in Panama to celebrate World Youth Day (WYD) 2019 and in front of 900,000 young people coming from 140 countries on five continents. During the period that this celebration took place, the Pope’s residence was the new building of the Apostolic Nunciature of the Holy See in Panama, whose facade and wall cladding was developed by the Canarian company ANTONIO AFONSO GROUP based in Icod de los Vinos.

The works were carried out between 2015 and 2016 and an attempt was made to provide an effective solution to the coating given the particular climatic conditions. Panama is a tropical country, with heavy rains during nine months of the year, no variation in temperatures ranging between 34°C and 37°C, and a high humidity index nearly 90%. To this, it must be added that the high degree of salinity through the incidence of crosswinds from both the Atlantic and the Pacific, puts the works to the test and affects them with great deterioration in a very short time.

This led, after various technical studies carried out by the technical staff of the company and the project’s architects, to choose a GLASSYDUR and STONEDUR coating for the facades and walls, among the various proposals presented. Ten Glassydur containers were manufactured at the production plant located in Icod de los Vinos and shipped to be installed at the Embassy. Likewise, six workers travelled from the islands and other twelve local workers were hired to carry out the work. The work did not focus only on the installation; It also collaborated with the construction management in other aspects of technical management of the project.

In just seven months, the tasks assumed were carried out, thus complying with the agreed schedule to complete them. This work, due to its importance, has been strategic in the company&#39;s positioning in Panama. The identity of the client (Vatican) gave rise to the development of other important projects that have been able to be executed since then, such as: “Santa Maria Hotel Golf Resort”, ”Santa María Court” or “Santa María Country Club”, among others.

Established by Antonio Afonso in 1989 in Icod de los Vinos, its development was due to a rapid expansion in the South of Tenerife, thanks to the projects beginning in the area of greatest and best expansion. Thanks to the well-known architect Andrés Piñero, the group became involved in works such as Gran Hotel Bahía del Duque, which was the first of them, and in many others taking place in the area. They soon made the move to other islands and to the peninsula before starting the international expansion of the company, of which Panama has proven to be the most successful and the one that bridges the next step of the company, such as making the leap to the United States, where its star product “Glassydur” has already been approved, together with all the certificates of technical suitability such as hurricane certificates, the highest distinction of construction products for extreme atmospheric conditions.