Constructions that return oxygen to the world

GF Hoteles has a long experience in the hotel industry since 1971. Our work philosophy is based, in brief, on two vital principles: you make our work and our professional endeavors worthwhile; and we know that luxury is attention to detail, which we uphold to the utmost and earnestly.

All its hotels enjoy the privilege of being located in Tenerife, four of them in the southwest of the island, in Costa Adeje, and a fifth hotel, in Puerto de la Cruz, in the north of the island.

The great luxury product of the GF Victoria 5 * GL Hotel aimed to offer an idea of a new vacation stay that included entertaining and serving all members of the family.

The design, distribution and construction of the suites, together with the leisure spaces, have been conceived to carry out an efficient management of resources unprecedented in the Canary Islands.

The great leisure attractions such as the hanging pool or the surf pool are combined with spaces for mental and physical relaxation.

The real challenge of the GF Victoria 5 * GL Hotel was to position itself as an innovative and sustainable concept of family leisure. This required excellence to meet the demands of a hotel with all the luxuries and comforts that a client can expect from this category.

The design of its facade and its majestic entrance, the design of the balconies and exterior of the rooms, pool area, attic and its incredible garden roof, put Glassydur’s capacities and qualities of adaptation and innovation to the test.

One of the biggest challenges, due to their meticulous manufacture, was the Canarian painting. This decorative element present on the interior façade of the building was made with Glassydur, previously prefabricated, although it really seems that the trencadís has been placed by hand.

The assembly of this structure was carried out by joining only two pieces, despite the fact that they could have been perfectly manufactured in just one. However, logistics forced to divide this decorative element in two.

The design of its facade and that of its majestic entrance, were built with plates and panels of Glassydur, micro-concrete reinforced with high-performance fiberglass.

At the entrance of the hotel, a pergola was placed that fully dominates the building’s front facade. Its high forms are in line with the oblique design of any hotel, transforming it into a modern and current structure.

Glassydur was used to manufacture this pergola, which was also installed in the attic, providing a perfect finish reminiscent of Corten steel or rusty steel with a design that gives the entire building great personality.

In the interior of the GF Victoria 5 * GL hotel Glassy was also used for the closing and cladding of the balconies and exterior of the rooms.

For the enclosure of the pool area, the Glassydur sandwich panel was used in combination with the Glassydur high plate that appears as a clearer distinctive element and in the form of columns of different sizes that protrude from the construction and coping.

The high plate takes on greater prominence in the parts in which the building breaks with the continuity of color and texture, as if the elements that it kept inside appropriate a higher category.

The success of this work does not reside solely in a material that far exceeded solving any practical or aesthetic need in this architectural project.

Really his greatest achievement is having had a material with magnificent technical qualities that allow a perfect reproduction of natural textures without the need for maintenance.

It is a building whose energy consumption is carried out in 90% through renewable sources and stands out above all for the materials used in the walls and roofs of the building.

The GF Victoria Hotel has received the recognition of efficiency in the design of the complex and also of its integral system as Top 10 of sustainable hotels in Spain.

It has a greater thermal insulation and a minimum consumption of conventional energy.

GF Victoria’s roof garden is the steepest in Europe and can generate savings of 20% in heating installations and 70% in air conditioning installations. Glassydur Rocalla was used for its realization.

This vegetal carpet was awarded with the Award for Best Sika Work 2017.

In addition to the numerous awards that support the success of this architectural project developed by the Fedola Group, it should be noted that the benefits that Glassydur provides as a high-performance material have allowed us to have the maximum guarantees to achieve optimal results that guarantee the present and future this structure. 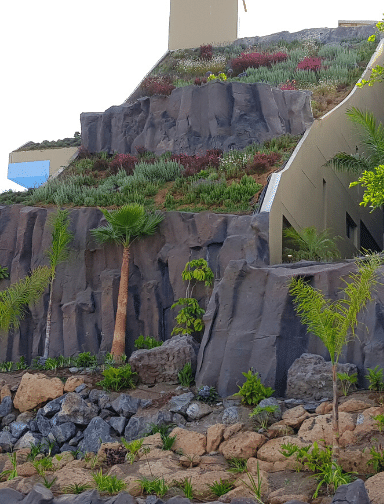