Solutions that elevate the category

Travelers rate it as a quiet place where you can come to rest. This four-star resort is located 3 km from the beach and the nature reserve of the Dunes of Maspalomas, Gran Canaria.

The objective of the 3-star Canary Garden Club Hotel was to move up to a 4-star category and convert part of the building into a family hotel with all the requirements that this entailed through a specific reform.

In 2018, the Arquisis architects studio was hired to design the entrance to the Canary Garden Club Hotel (once 3-star) located in Maspalomas.

For this, they thought of a constructive solution that would provide architectural value without losing sight of the different technical aspects and needs of the client with a design in harmony with the rest of the building.

Finally, they achieved a visually attractive, current and modern projection that took into account aspects of light and allowed the entrance not only to be a place of transit, but also a room in which, without going outside, contact was maintained with it.

The design was approved in the plans, but they needed a material that would provide a constructive solution to the project without varying the design and taking into account costs and durability.

The Arquisis study, after making the plan design, needed a constructive solution that did not lose sight of two essential aspects: costs and durability of the structure.

It was not only intended to achieve excellent finishes, but to endow the beam structure with a much superior execution. The choice of Glassydur would allow greater quality control to be achieved.

Finally, the Glassydur Sandwich panel was chosen to provide a solution to the design, technical and structural requirements, testing, once again, the capacities and qualities of adaptation and innovation of precast concrete.

The flat design consisted of five and a half meter high beams that held a glass in the central part, leaving the sides open to the outside.

The approach of this structure formed by consecutive beams, which as a whole simulated an entrance tunnel to the hotel, gave the possibility of taking advantage of the natural light outside through its slits and in turn allowing rainwater to be used to the side planters.

Glassydur, as the material responsible for giving the entry a greater category, meant that the demanding qualities raised on the plan were not lost in the execution. For this, several prior technical studies had to be done.

Each section was analyzed in order to ensure easy maintenance of the structure. On the other hand, the weight and dimensions that the beam set had to support were calculated.

In addition, a new challenge posed by the terrain had to be solved. The vegetation was an essential part of the complex, so the beams had to respect the space, and in one case in particular, surround a large palm tree.

The manufacture of each of the Glassydur Sandwich panel pieces was carried out in Tenerife. Subsequently, they were transported on a plate of about seven meters that ensured that the material arrived in perfect condition and prepared for immediate installation.

Glassydur’s Sandwich panel allowed quick and easy placement. The reform lasted only a month from the manufacture of the beams to the completion of the installation. And for its assembly, only one crane was needed.

Excellent finishes were obtained in addition to providing the beam structure with a much higher quality and execution.

In addition, it was possible to take advantage of the natural light outside and the rainwater through its crevices, thus achieving a more sustainable and efficient structure. 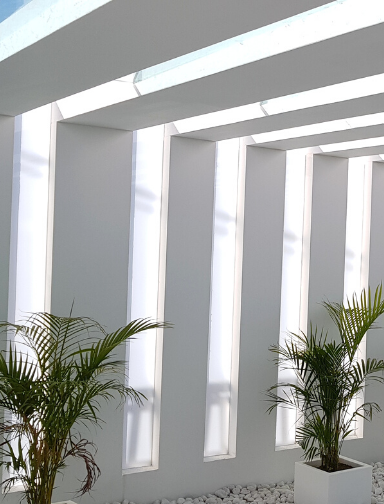 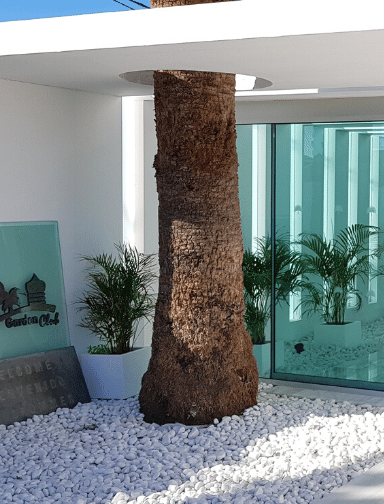 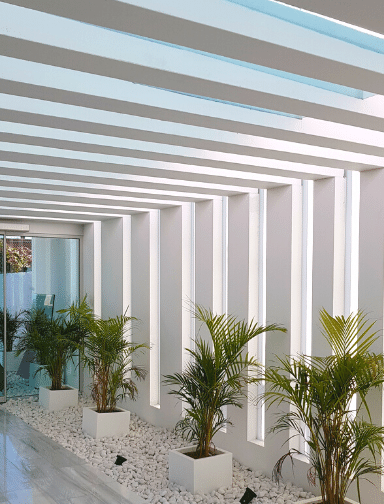